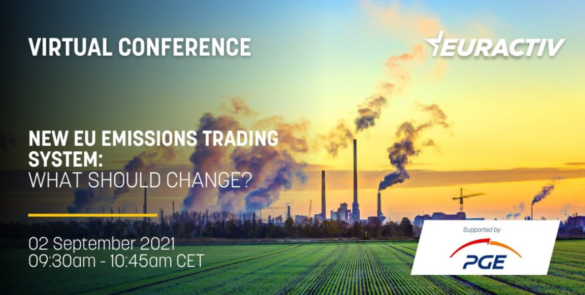 The aim of the EURACTIV Virtual Conference was to discuss how the EU ETS should evolve and what should or should not be changed in the Commission’s new proposal. The meeting was attended by Beatriz Yordi Aguirre (representative of the European Commission), Robert Jeszke (CAKE/KOBiZE), Paweł Cioch (vice president of the management board of the PGE group), Florian Rothenberg (ICIS), Marian-Jean Marinescu (MEP from EPP) and Milan Elkerbout (CEPS) . The discussion was moderated by Frederic Simon. 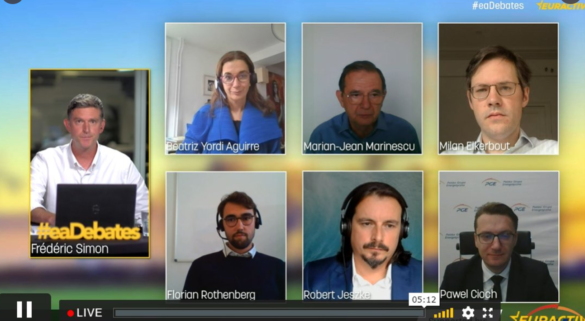 EU lawmakers following a month-long summer break to begin their scrutiny of the Commission’s mammoth ‘Fit for 55’ package of proposals which aim to strengthen the EU climate policy in line with the increased 2030 emissions target of 55% vs. 1990 levels. European Commission emphasized the “EU ETS market is working, there is a strong decarbonisation signal, and there is a range of investment mechanisms and other tools to cope and to drive to decarbonisation in the proper way”. Today’s EUA price come in the context of rising gas costs and this situation is not likely to last long. Beatriz Yordi Aguirre recalled that the impact assessment for the EU ETS reform proposal, assumed that the EUA’s price may range from EUR 50 to EUR 85 by 2030.

lorian Rothenberg (ICIS) admitted that the EUA’s pirce rally is impressive – their values have increased by as much as 90% since the beginning of the year, as a result of the increase in gas prices and the return to coal. The growing role of speculators, who anticipate a greater supply cut in the future due to more ambitious reduction target in the EU and the stricter MSR reserve mechanism. Rising EUA’s indicate the industry should start investing in emission reductions right now before the Fit for 55 package is agreed (which may take about 2 years).

Robert Jeszke (CAKE/KOBiZE) has noticed the Fit for 55 package significantly reducing the cap in the EU ETS by doubling LRF and transfers to MSR would lead to EUA supply squeeze and spikes in EUA prices in the near future. EC does not have a “safety valve” to stabilise EUA prices which increasing too high too fast. Admittedly, the MSR mechanism allow to release allowances to the market (200 mln when the TNAC is below 400 mln and theoretically 100 mln from Article 10c which in practice it is difficult to trigger), but after 2023 there would be not enough allowances in the reserve (400 mln) to intervene when the situation required it. Extremely high EUA prices is a deliberate action by the European Commission (which is evidenced by Timmermans’ statements that current prices are too low) to accelerating the transformation in the energy sector and other industrial sectors covered by the EU ETS. The question, however, is whether such a fast transition with extremely high EUA prices is possible especially in EU countries like Poland which have a different starting points. They would have less money available to invest in low-carbon technologies (because instead they will have to buy very expensive EUA allowances). CAKE forecasts that the investment for the energy sector in the scenario of increasing the reduction target will in 2021-2030 amount to approx. 45,6 bln EUR in Poland. The revenue from the sale of allowances in FM can be estimated at approx. EUR 9,88 bln. That is, approximately four times less than the projected investment value. 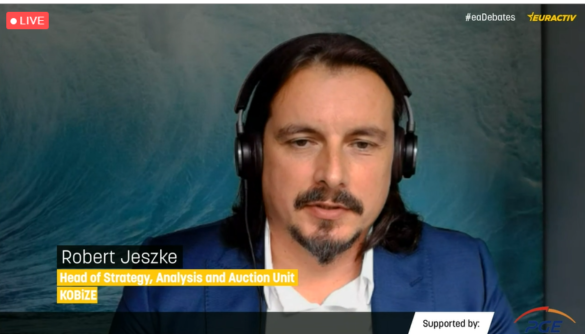 Most of emission reduction in Poland takes place in the energy sector. The sector will be responsible for 80% of total emission reduction by 2030 vs. 2015. This implies that a large share of reduction potential in the energy sector will be utilised in the first transformation period. Climate targets in 2030 will be achieved with relatively high marginal cost of emission abatement – above 100 EUR/tCO2 eq. in the EU ETS. Achieving deep emission reduction in the energy sector by 2030 will be associated with large capital costs, which – combined with increase in costs of operation – will lead to a significant increase in costs of electricity and district heat generation. The role of renewable energy sources in energy system will grow. Their development will be additionally stimulated by decreasing capital costs. However, growing capacity of wind and photovoltaic installations will require reserve capacity. In this term, the exclusion of natural gas as the transitional fuel from the scope of the Modernisation Fund investments is not a good idea.

The effectiveness of EU ETS depends on other instruments of climate policy. Instruments that support the deployment of Renewable Energy Sources (RES), such as auctions or feed-in tariffs cause a drop in the demand for EUA and, consequently, drop in EUA prices. Similar effects are induced by instruments subsidiary technologies that increase energy efficiency and reduce the demand for energy. On the other hand, the EU ETS system itself affects the effectiveness of other instruments. For example, high prices of EUA improve the competitiveness of RES and thus reduce the role of RES subsidies. In countries with carbon-intensive power sector high EUA prices will also sharply increase the price of electricity, which could slow down diffusions of e-mobility and increase electric poverty. Thus a judgment on the effectiveness of the system requires an integrated assessment taking into account the potential synergy or conflict between policies. Therefore, CAKE is working that within a new project – LIFE VIIEW 2050 on providing an effective input on the role of possible actions and scenarios, and interactions as well as other ETS systems and new sectors which relates to the reduction of the emission in both ETS and non-ETS sectors.

Paweł Cioch (PGE) supported the proposal to use all EU ETS national carbon revenues to finance investments in line with the EU ETS directive. This means more public funds to finance the energy transition. However, it must be kept in mind that for certain countries the investment needs stemming from 55% climate target largely exceed the national revenues from the EU ETS. Because of that, countries like Poland have structural deficit of allowances, which has been estimated by independent think-tank at 660 million of allowances less than expected emissions until 2030. That’s approximately EUR 40 billion with current CO2 price that the Polish companies will have to spend abroad, which causes cash flows resulting in less funds to finance the energy transition with the Polish own resources.

Poland having less allowances than the needs should be able to contribute to MSR proportionally less and use a part of volumes dedicated to the MSR to finance its own transition instead of Polish companies financing budgets of other Member States. EC should alleviate extra energy transition costs for households through an appropriate increase of the Modernisation Fund and should keep the possibility to finance gas investments from the Modernisation Fund if the EU wants to show that it has good recognition for different starting points. Strenghten the MSR reserve is not necessary to achieve the same objective when we already have an increased LRF of 4,2%.

Marian-Jean Marinescu (EPP) stated that the legislative process of approving the Fit for 55 package will not be easy, and the rising EUA’s prices may have strong impact to the EU economy. The EC impact assessment is “very weak” due to the lack of sufficient information and data in the document on investment costs and costs that consumers and companies will have to bear.